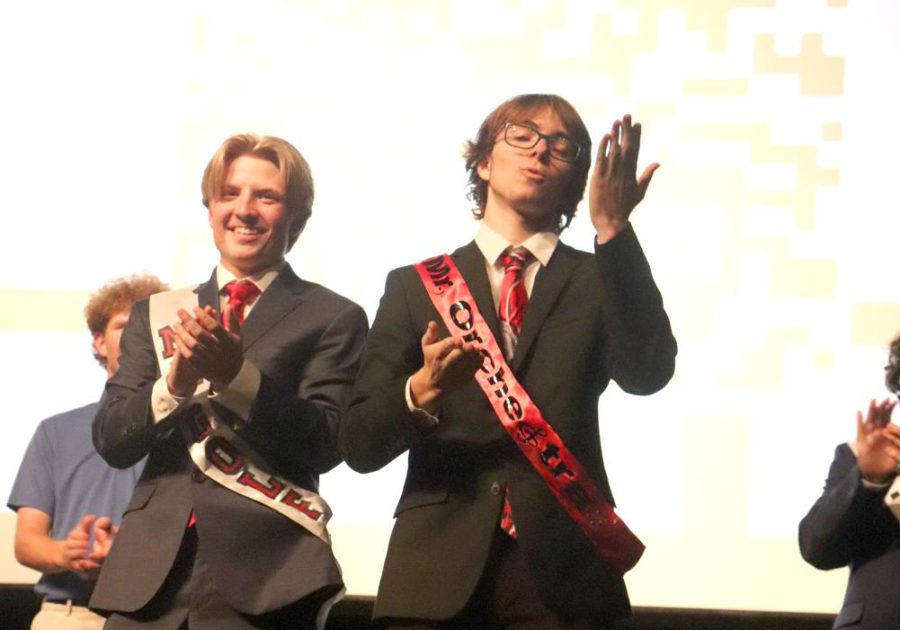 Senior Alex Voss thanks the crowd after being announced into the final four following senior Andrew Faust. Voss won the competition and was named Mr. RSH.

Carrie Sandler, Of The Talon staff

After a hiatus due to COVID-19, the Mr. RSH event highlighting the senior men returned to the stage on April 28.

This year eleven senior boys participated in Mr. RSH, either representing a club, musical group, or sport. Each boy was introduced in their representative apparel, created a skit for the competition and went through a formal presentation with their mothers escorting them. While the event had many fun aspects, STUCO sponsor Thomas Cassilly said this was a lower turnout of boys compared to years past.

“In 2019 we had about twenty three boys, about half as many this year,” Cassilly said. “Not many guys wanted to do it [this year.] We originally asked about fifty boys, and every single one of them said no. Then, we had the coaches and club sponsors nominate them so they were more willing to do it.”

One of the participants was senior Alex Voss, who was Mr. Orchestra. Voss said he decided to do Mr. RSH after watching his brother do it years before.

“I had seen it freshman year and when my brothers did it, it just seemed fun,” Voss said. “It was kind of my last impression on Summit and it was honestly just being able to be my true self.”

The biggest part of the competition were the acts. The boys each could come up with their own act regardless if it was related to their club or not. Cassilly said many of the acts are usually just ridiculous things, but they all entertain the audience well.

“I don’t really mind what the act is as long as it’s appropriate. In the past we’ve had students go on stage and teach people how to iron a shirt and that was their talent, and we’ve had people dance as well. Really anything they thought would be unique and fun to do on stage,” Cassilly said. “My favorite act was [senior] Nathan Bright with the Bob Ross painting presentation, and then [senior] Mason Brown’s speed eating was also fun to see.”

Once the main part of the competition was finished, judging and voting occurred among the audience, something Cassilly said had not been done before at previous Mr. RSHs.

“In the past we’ve usually had three judges decide who Mr. RSH is, but this year, I said I’m just going to put a QR code out there and just let the audience vote, and I think it worked out really well,” Cassilly said.

Ultimately, Voss won the competition, which he said he was surprised by.

“I didn’t really think I would win just because I felt like the other acts were pretty funny. I was happy though because both of my brothers had done it in the past and they didn’t win, so they texted me before and told me to win for them,” Voss said. “Winning just felt surreal.”

Looking back on the conduct of the event, Cassilly said he believes that Mr. RSH was a success, and is looking forward to next year.

“Next year I am definitely going to start preparing everything earlier so we have more time to get more people involved. I’m also going to reach out to some of the theater kids to help me put on the production so we can work things like lights for next year to have a better quality production,” Cassilly said. “This was the first year I have done Mr. RSH, and I felt like it was a success, and overall I was happy with the results.”