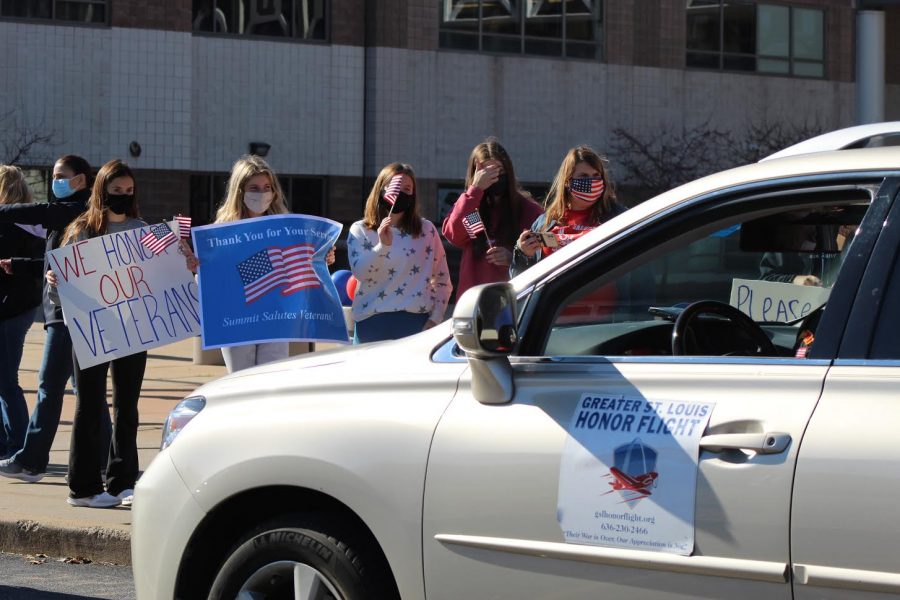 To honor veterans who served for the country, Rockwood Summit hosted a drive-by parade after COVID-19 prevented the annual luncheon from occurring.

On Nov. 11, several students stood outside of school to show their appreciation for the veterans. The ability to have a drive-by parade allowed the students to give those who served recognition while being cautious. Senior Johanna Broten said that in the past veterans would walk through the commons and students would cheer them on.

“Typically it is a walk through in the commons and all the students get out of class to cheer but this year, since we weren’t at school in person yet, a bunch of students came up to Summit to make it special for the veterans,” Broten said.

However, with the impact of COVID-19, safety was important for not only the students, but also the veterans. Senior Amisha Condoor said that the parade was well organized and the school did a good job keeping it enjoyable while being cautious.

“Everyone had to wear masks, and having it be a drive by parade outdoors made it so that we were able to stay safe,” Condoor said.

Not only was a change in scenery made to keep people safe, but so did the roles that the students took on. Senior Brooke Gudgeon said that in the past years, the cheerleaders would accompany anyone’s needs and help serve food; however, this year the cheerleaders helped organize goody bags and blew up balloons.

“The experience was so heartfelt to see that we could modify something traditional to make sure everyone felt safe,” Gudgeon said.

In addition to helping organize goody bags and balloons, other students came to support those who served. Junior Ally Baur said that her role was to wave flags, clap, and cheer for the veterans driving by.

“I enjoyed my experience a lot because I would wave to a vet and they would wave back and it just got me super excited and pumped up,” Baur said.

Broten said that it was an enjoyable experience to be a part of.

“I enjoyed the experience because it felt good to be able to do just a little something to show our gratitude to the people who have served our country,” Broten said.