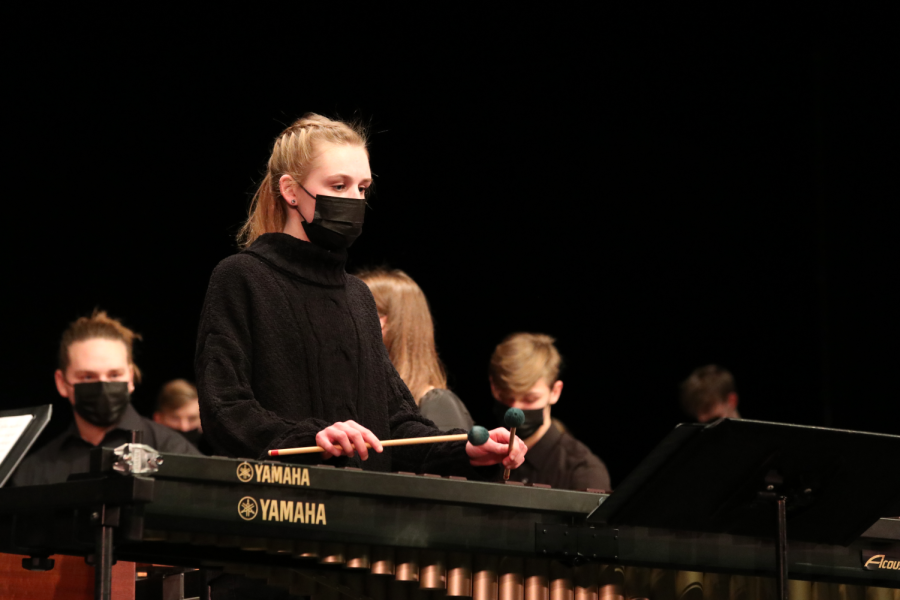 Senior Grace Bailey plays the marimba at the band concert held on Jan. 25. Orchestra and band attended the Missouri Music Educators Association on Jan. 26 and 29

The annual convention took place Jan. 26-29 at Tan-Tar-A Resort in Osage Beach, Missouri. As in previous years, the groups were required to send in audition videos in order to be considered for a spot in the concert. All recordings were made the year prior according to orchestra teacher John Mazar, who said that the audition features last year’s orchestra, while this year’s is the one who attends and performs.

“Every year, MMEA holds a state music conference at Osage Beach, Tantara resort, and they select ensembles to perform in it from schools around the state. You send in an audition of your group playing, but you submit the recording the year before, so on the recording you actually have last year’s group, and then you bring this year’s group. So all the freshmen this year weren’t a part of the recording process but they were a part of the concert,” Mazar said.

Several different types of ensembles are eligible to participate in the conference ranging from concert bands to orchestras, choir groups, and percussion ensembles. Typically, multiple band, orchestra, and concert groups are accepted, however percussion teacher Peter Repp said that only one percussion ensemble is taken each year, which made the opportunity to go all the more meaningful.

“It meant a lot that we got to perform; it was very validating. I’ve always thought that we had a really good percussion ensemble that the kids play really well and it was nice to hear that other people around the state agree,” Repp said. “It was also a little bit of a surprise- not because I didn’t think we were a good ensemble- but because with percussion ensembles they only select one each year, including university ensembles. So usually it’s Mizzou or Truman or one of the universities that gets selected, so to see that we got to do it as a high school felt pretty good.”

In order to prepare for the concert, ample rehearsal was required. Mazar said that rehearsal was crucial to the orchestra’s success and that their hard work paid off in the end.

“We had extensive rehearsals, some FLEX time rehearsals. We really pushed hard to get to the highest level that we could. It was a battle at times but in the end, the finished product was so awesome and I think the kids were super proud of it and I was obviously super proud of them. It’s one of those things where you hope that the hard work pays off and in this case it did,” Mazar said.

The percussion ensemble and orchestra each had their own respective performances at the conference; percussion took place early morning on Thursday Jan. 27 while the orchestra’s took place that afternoon. In order to have adequate time to prepare for their concert, the band traveled down to the resort the day before their performance. There were many moving parts and Repp said that the group was up most of the night and up early in the morning to ensure that they were ready for the convention.

“We drove down on Wednesday afternoon because we had to go set up that night for our performance early Thursday morning. We had to wait until the convention was done, which wasn’t until around 10:30 p.m., and then set up took until about midnight,” Repp said. “We got to go back to the hotel and sleep for a few hours after until we had to get up at our 5 p.m. call time. We performed at 8 a.m. on Thursday. It was just a lot of getting ready and setting up and moving things around- we took two full trucks of stuff there- and then we had our early performance.”

Mazar shared Repp’s sentiment on the frenzied nature of the conference. Upon arrival, Mazar said the orchestra had to unload quickly before their on-stage rehearsal, which was occurring at the same time that other groups were performing in rooms adjacent to theirs.

“It is kind of chaotic once you get down there because it’s super crowded and there’s buses everywhere and the roads are really narrow. Once there, you have to unload and get to a storage area and everything, then you have rehearsal time that you have to go to and meanwhile there’s groups playing on the stage so you’re constantly rotating in and out. So it’s super neat that you get to see all these other groups playing and spend some time listening to a whole bunch of other groups from around the state,” Mazar said.

While the orchestra has had the opportunity to attend the convention several times in the past, this was the first time the district has been able to send a percussion ensemble. Repp said it was difficult for the ensemble to break the barrier to get into the performance, but he is proud that they were finally able to have the chance.